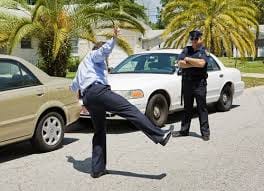 In most DWI cases, intoxication or sobriety is basically the only issue. If the defendant provided a chemical sample, and that sample’s BAC level was above the legal limit, the defendant is normally guilty as a matter of law.

If the defendant did not provide a sample, or the sample was below the acceptable BAC, the prosecutor must use circumstantial evidence to establish guilt beyond a reasonable doubt.

However, a Weatherford DWI defense attorney may have some other options as well. After carefully reviewing all the facts of the case, some of these defenses may be relevant under Texas Penal Code Section 49.04.

In some movies, fleeing suspects believe that if they cross the county or state line, pursuing officers must give up. That’s not exactly true, but nevertheless, these boundary lines matter.

Prosecutors must file the court case in the county where the offense occurred. A Parker County court has no jurisdiction over an offense which occurred in Tarrant County. If officials file the case in the wrong county, prosecutors must normally dismiss it and start over. That legal speed bump delays the case, causes more paperwork, and increases the possibility of a favorable out-of-court settlement.

Surprisingly, “driving” is not an element of “driving while intoxicated” in Texas or most other states. However, the defendant must have physical control over an operational vehicle.

For example, if Esmeralda runs out of gas on the highway, DWI charges probably will not stick. Even if she was intoxicated, she could not have driven the out-of-gas vehicle anywhere.

This issue sometimes comes up in DWI collision cases as well. If Esmeralda was drunk and collided with another vehicle, she will probably be outside her car by the time the police arrive. If there is no witness who can place Esmeralda behind the wheel while she was intoxicated, DWI charges probably will not stick. She may be guilty of public intoxication or some lesser offense, but these crimes do not have the same direct or collateral consequences of a DWI.

Just because a roadway has lanes, traffic control devices, and a name does not mean that it is a public place. Many large shopping malls have long driveways which look like streets. They may even have officers directing traffic on these driveways during Christmas. But they are not public places. The same thing applies to private rural roads or privately-owned lakes.

The SBI defense is another common DWI collision issue. Under the law, “serious bodily injury” essentially means that the person received extensive treatment at a hospital emergency room. Many times, emergency responders send crash victims to the hospital where they are treated and released. That may or may not be the same thing as SBI.

Prosecutors must establish every element of a DWI beyond any reasonable doubt. For a free consultation with an experienced criminal defense attorney in Weatherford, contact Herreth Law. Home and jail visits are available.