What We Leaned from O.J. Simpson and Rodney King 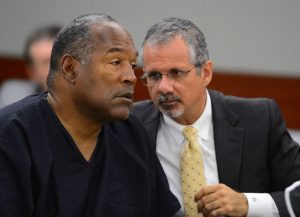 These headline-grabbing 1990s cases passed from the public consciousness a long time ago. But they still have some very important lessons for criminal cases in Tarrant County.

USC and Buffalo Bill standout O.J. Simpson played running back during the 1960s and 1970s. He still holds several records, including the highest per-game rushing average and the highest single-season total in a 14-game schedule. He parlayed that successful career into a semi-successful 1980s acting career, mostly as a corporate pitchman in TV commercials. But in 1994, he was arrested and charged with the brutal murder of his ex-wife.

In 1991, taxi driver Rodney King was high on PCP when officers pulled him over for speeding. Several officers, who claimed that Mr. King resisted arrest, savagely beat him with their knight sticks as he lay on the ground. But amateur video from the scene seemed to discount their stories.

By the time his case reached trial, prosecutors had a mountain of circumstantial evidence against Mr. Simpson. However, it was pretty much all circumstantial. Prosecutors can and do still win these cases, especially in places like Tarrant County. But given the high burden of proof in these cases, they are difficult to win.

Circumstantial evidence cases usually involve lots of witness testimony and lots of puzzle pieces. The Simpson case was no exception. Defense attorneys allowed prosecution witnesses to drone on and on about footprint configuration and analysis of trace blood samples. These attorneys also cross-examined these witness ad nauseum. In other words, they just went on and on and on. Mr. Simpson never even testified. By the time testimony finally ended, there were so many puzzle pieces that the jury was not able to put them together. He was found not guilty.

Some attorneys call this approach the “sink-and-ink” defense. Keep a low profile, confuse the jury, and good things normally happen.

That beating video looked pretty bad. But good criminal defense attorneys never run from challenges. Instead, they embrace them.

During trial testimony, attorneys showed the video over and over. They might spend several hours on one or two frames. Very quickly, jurors became desensitized to the brutality. Bloody crime scene photos usually make jurors cringe. But after they look at them awhile, they do not seem so bloody. So, this jury acquitted all the officers involved.