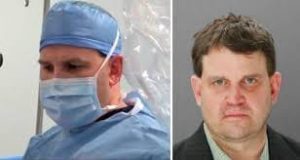 In a controversial case, the Fifth Court of Appeals in Dallas upheld Dr. Christopher Duntsch’s conviction for “causing serious bodily injury to an elderly individual while using or exhibiting a deadly weapon.” The deadly weapons were his hands and a medical implant.

In 2011, the doctor performed back surgery on a 74-year-old woman. She came out of the surgery worse off than she was before. Her back pain was worse, and her new symptoms included incontinence and drop foot. According to the court, Dr. Duntsch put a metal screw in the wrong place, causing “holes where they shouldn’t be in the bone.” Furthermore, another back patient’s deteriorating condition may have distracted Dr. Duntsch during the procedure. That other patient subsequently died. The jury heard all about these facts, and also about alleged prior malpractice. A defense expert testified that the mistakes were “known complications” which could happen if a “poorly-trained surgeon” attempted the operations. In other words, according to the defense, Dr. Duntsch was an incompetent physician and not a criminal.

The court ruled that the prior bad acts were admissible and affirmed the life sentence. D Magazine, and several other sources, gave the defendant the “Dr. Death” moniker.

Prior convictions are usually admissible in criminal cases. Indeed, a prior conviction is sometimes an element of the offense. In other situations, it’s assumed that the defendant had a chance to fight the conviction and lost.

But with regard to uncharged prior offenses and other previous bad acts, the dynamic is much different. If these acts were admissible, many juries might convict defendants because they were bad people and not because they committed specific crimes. So, these acts are only admissible for limited purposes, including:

Prosecutors know it’s against the rules to use prior bad acts as character evidence, but they often try to do so anyway. So, a criminal defense attorney must be vigilant, especially during closing arguments.

If prosecutors introduce prior bad acts, they usually cite that last bullet point. It is not easy to prove intent using conduct. Now, there is talk of removing the “knowingly” element from many crimes and replacing this word with “intentionally.” If that happens, mens rea (criminal state of mind) will be even harder to establish.

If the legislature drops “knowingly,” it may also be more difficult to admit prior bad acts in the first place. For example, Dr. Duntsch arguably knew that his actions might cause bodily harm, since he had done it before. But there’s no way the prior acts prove intent to harm.

The relationship between conduct and intent means a lot in your criminal case. For a free consultation with an experienced criminal defense attorney in Fort Worth, contact Herreth Law. Convenient payment plans are available.