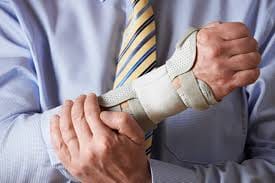 Insurance company lawyers, on the other hand, do whatever it takes to reduce or deny compensation to victims. A number of legal loopholes are available. Some of the most commonly-used insurance company defenses are discussed below. To better explain them, we’ve tried to remove some of the Legalese and put them into plain English.

This defense often comes up in pedestrian injury claims. Often, the insurance company claims that the victim “darted out into traffic” and therefore the tortfeasor (negligent driver) could not avoid the collision. This position lays the groundwork for the sudden emergency defense. There are two prongs:

This clip from Tommy Boy illustrates both prongs of this defense. The hood fly-up is a sudden emergency, because it is a completely unexpected situation. The same thing applies to a tire blow-out and other such events. But a jaywalking pedestrian is not a completely unexpected situation. A pedestrian outside a crosswalk is a lot like a large pothole or a stalled car. These things happen a lot, so drivers should account for them.

Even though the hood fly-up is a sudden emergency, Tommy could not use this defense. He did not react reasonably to the sudden emergency. Instead of pulling over to the right, he drove recklessly and even crossed the center line. But after all, it is a comedy movie.

Tommy Boy is a rather bittersweet comedy, because actor Chris Farley died before his time. The same is true of Planes, Trains, and Automobiles. Actor John Candy passed away in 1994, and director John Hughes passed away in 2009. This particular scene illustrates the last clear chance defense, which comes up very often in head-on and rear-end collision claims.

If a driver has a reasonable opportunity to avoid a collision but does not do so, that driver is responsible for damages, regardless of the other facts in the case.

Since Dell Griffith was “going the wrong way,” it seems clear that he was legally responsible for the collision. But did you notice how straight the road was? Did you also notice that the oncoming semi-trucks honked but made no effort to avoid the crash? Therefore, upon further analysis, the last clear chance defense may apply and the truck drivers might be legally responsible for this unfortunate collision.

Assumption of the Risk

Speaking of unfortunate situations, loyal SpongeBob viewers may remember that Patrick fell off a cliff in Patrick SmartPants after a friendly game of tag went way off the rails. Much like sudden emergency, the assumption of the risk defense has two prongs:

·       Voluntary Assumption: Intelligence is not a factor here. Patrick ran off the cliff of his own free will.

·       Known Risk: This one is different. Clearly, Patrick could not read or understand the sign. Therefore, the risk of falling off a cliff was not a known one. On a somewhat related note, who puts a “Danger Cliff” sign on the edge of a cliff? Wouldn’t it be more effective a little further back?

Attorneys should anticipate some common insurance company defenses. For a free consultation with an experienced personal injury lawyer in Weatherford, contact Herreth Law. Attorneys can connect victims with doctors, even if they have no insurance or money.