Breaking Down the IID Requirement in Parker County 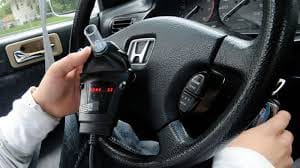 Most people do not associate “blow-and-go” Ignition Interlock Devices and the Eighth Amendment. But this provision prohibits “cruel and unusual punishments.” Arguably, the IID falls squarely under that label.

Despite any concerns over the device, the IID is not going anywhere. MADD embraces it as an effective tool to reduce alcohol-related crashes. In fact, the group is less excited about a lower BAC limit than enhanced IID usage. Texas is one of the few non-mandatory IID states, so the Lone Star State is in MADD’s crosshairs with regard to this issue.

What is an IID?

Ignition Interlock Devices are not quite as common in pre-conviction administrative license revocation cases as they are in post-conviction or bail-related judicial suspension matters. ALR officers arguably lack the authority to require IIDs. So, especially if the driver has an attentive lawyer, many hearing officers are unwilling to push the envelope.

Basically, the IID is a Breathalyzer without a digital readout that’s connected to the vehicle ignition. The driver must provide a sample before starting the car and also periodic “rolling” samples while the car is in motion. If the driver fails the initial test, the car will not start. If the driver fails a rolling test or has too many rolling refusals, the vehicle will not re-start.

The machine usually cuts off the ignition if the driver’s breath sample is higher than .04. That’s considerably lower than the legal minimum, and that’s one of the problems with the IID.

Early-generation IIDs were rather easy to fool. For example, anyone could blow int the tube and provide a sample. It could be the driver or it could be a sympathetic bartender. But most IIDs now have digital cameras. Once the judge finds out the defendant tried to circumvent the system, adverse action usually follows. That could include bond revocation or an extended IID requirement.

An IID is not quite a scarlet A, but it is pretty close. Anyone who gets into the car immediately knows that the driver has had alcohol-related legal issues.

Furthermore, as mentioned, .04 is usually well below the legal limit. Prosecutors can and do argue that a .04 is usually substantial impairment. But the fact is that if a defendant blew a .04 after a DWI stop, it would be almost impossible for prosecutors to prove intoxication beyond a reasonable doubt.

These arguments probably will not get the IID requirement set aside altogether. But they may be persuasive in a modification setting. IIDs are expensive as well as burdensome. The installation and removal fees are often at least $100 each, and the monthly monitoring fee is usually at least $40. Furthermore, the device must be calibrated once a month, and that appointment often takes an entire workday.