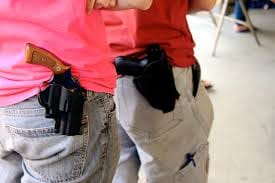 Texas has one of the most liberal License To Carry handgun laws in the United States. Even unlicensed individuals may carry their handguns in certain places. So, the list of prohibited places for licensed gun owners is even smaller. However, there is still a list.

Some of the prohibited places are simple and straightforward. Others, however, are a bit more complex. That complexity gives an aggressive attorney an opening when the UCW (unlawfully carrying a weapon) case goes to trial.

Essentially, employers may allow or prohibit concealed weapons almost as they like. But the policy must be universal and apply to everyone. The boss cannot carry a gun and forbid employees from doing so. The same thing applies to guests. If guests can carry handguns onto the premises, everyone else should have that right as well.

The law has a 51 percent cutoff. It’s illegal to carry a handgun in places that derive more than 51 percent of their income from alcohol sales. Unless the establishment is a liquor store, these LTC violations are almost impossible to prove. Alcohol is so expensive that most convenience stores derive most of their income from these sales, even if they only have one or two alcohol coolers. Unless the establishment has a “no guns” sign, it’s almost impossible to know that. Moreover, there’s no formula to determine that 51 percent number. Is that 51 percent per day, per week, per month, or per year?

We all know what schools look like, right? Aren’t they all large, single-purpose buildings filled with children? Not necessarily. Some schools are isolated laboratory annexes. Moreover, the law does not really say anything about children being present. What if you take your gun to a school’s administrative office? Or, what if you have your gun when you pick up your son after school hours?

Curiously, it’s illegal for anyone to carry a handgun to these events, but even unlicensed owners can carry long guns to professional sporting events. Go figure.

The same issues with some schools may apply here. Frequently, traffic courts and other annexes are inside office buildings. The same thing applies to probation offices and other court-related locations. If the judge is on the second floor, can you carry your gun on the first floor? What if you get in the elevator? Is it still okay to carry your handgun?

The LTC prohibited place laws are quite complex. For a free consultation with an experienced criminal defense attorney in Fort Worth, contact Herreth Law. We are available for consultations 24/7/365.