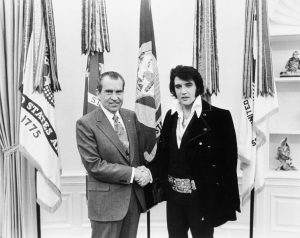 One of the most bizarre incidents in Presidential history probably launched the so-called war on drugs. In December 1970, Elvis Presley, who was clad in a purple velvet suit, unexpectedly dropped in on President Richard Nixon at the White House. After presenting the somewhat befuddled Nixon with a Colt .45 pistol, Elvis insisted that he was an authority on “drug abuse and Communist brainwashing techniques,” so he would be an excellent undercover marshal. Nixon politely refused the singer’s assistance. Even now, the Elvis-Nixon photo remains iconic.

Today, some fifty years later, very few drug arrests involve legendary singers or world leaders. Instead, most of them involve one of the three scenarios discussed below.

In many cases, a search warrant is the pinnacle of a months-long drug trafficking investigation. Investigators usually work long and hard, and enlist the help of confidential informants, to develop probable cause.

After such a massive investment, there is tremendous pressure to make a headline-grabbing arrest. So, many officers take short cuts, especially during the home stretch. Furthermore, over-reliance on paid informants is quite common. In many cases, these individuals receive tens of thousands of dollars. As a result, the information they provide is often a little shaky.

Search warrants also have technical issues. The warrant must be specific, especially as to items to be found and places to be searched. If the warrant is for methamphetamines in the garage, officers usually have no right to look in the living room for illegal prescription drugs.

Many marijuana, cocaine, and other street drug cases involve traffic stops. If an officer stops a carful of people and finds drugs anywhere in the car, all occupants usually go to jail. But in court, prosecutors must establish more than proximity. The other elements of possession are:

· Control: Proximity is not synonymous with possession, even though they both start with the same letter. For example, if the drugs were in a locked glove compartment, only the person with the key could legally possess them.

· Knowledge: On a related note, the defendant could literally be sitting on drugs and not possess them. The prosecutor must prove that the defendant knew there were drugs in the box, under the seat, in the bag, or whatever.

Prosecutors must prove every element of drug possession beyond a reasonable doubt.

There are a number of search warrant exceptions. The exigent circumstances exception allows police to enter buildings if they suspect danger. That could be something like a report of a gas leak or shots fired at that location. While they are in the building, they may seize any contraband that they see in plain view.

The scope of these searches is sometimes an issue. If officers received the report at 1pm, do they need a warrant if they don’t arrive until 1:30? Or, if the shots were fired in the front yard, do officers have a right to search the house and the back yard as well?

Drug arrests entail a number of legal issues. For a free consultation with an experienced criminal defense attorney in Weatherford, contact Herreth Law. Mr. Herreth is a former prosecutor who now works for you.