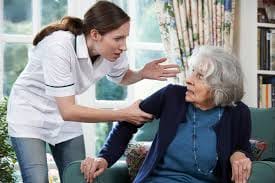 Experts predict that the over-65 population will double by 2060. Most of these people will spend at least some time in a long-term care facility. The expanding population means that crowded nursing homes will become even more crowded. That environment sets the stage for abuse and neglect.

This type of violence is the fastest-growing type of nursing home abuse. Many times, the nursing home does not have enough staff members to break up petty squabbles before they become violent. And, since many nursing home residents are physically frail, a little bit of force may cause serious injury.

This same combination often leads to staff-on-resident physical abuse. Overworked staff members sometimes get frustrated, and they sometimes take out their frustrations on residents. Common incidents include things like pushing residents into their rooms or dragging them out of bed. Once again, slight use of force often leads to serious injury.

Most nursing homes have plenty of nutritious food. But as we get older, our senses often degrade. Food no longer smells good, looks good, or tastes good. As a result, many residents simply do not eat their food. If no dieticians or nurses circulate among residents during meal time to make sure they eat, they may not do so.

In many ways, pressure ulcers are a signature nursing home neglect problem. As long as patients turn over in bed every few hours, pressure ulcers never develop. Additionally, even if the patient develops a bedsore, if caught early enough, the bedsore usually goes away on its own. But undertrained staff members may not be able to recognize early stage bedsores, and many nursing home residents cannot turn themselves over in bed. As a result, these wounds worsen and quickly become life-threatening.

The aforementioned staff frustration sometimes surfaces in other ways. Instead of physically assaulting residents, the assault may be emotional. For example, someone may say something like “no one loves you” or “everyone has forgotten you.” Additionally, in some facilities, staff members isolate residents in their rooms for long periods of time. That could be because there is no one to watch the resident or a form of punishment.

Nursing home abuse and neglect comes in many forms. For a free consultation with an experienced personal injury lawyer in Weatherford, contact Herreth Law. Home and hospital visits are available.