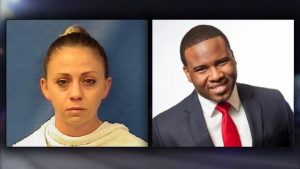 Dallas County officials charged Amber Guyger with manslaughter. But she will now face murder charges when her case goes to trial sometime next year.

The former Dallas Police Department officer shot and killed a neighbor after she claimed she accidentally went into the wrong apartment and mistook the victim, Botham Shen Jean, as an intruder. She shot him with her service weapon. Ms. Guyger claimed that she was very tired after working a long shift and unintentionally shot Mr. Jean.

Outgoing Dallas DA Judge Faith Johnson defended the long delay between the September arrest and December grand jury date. “We thought it was murder all along,” she explained. “But we didn’t file this case … we did what we had to get this case ready for the grand jury. Justice is never too long.”

Types of Homicide in Texas

· First Degree Murder: Capital murder is either a crime of premeditation or a crime against a protected class of persons. Premeditation basically means a prepared killing. The preparation need not be a sophisticated conspiracy. A seemingly simple act, like going to your house, retrieving a gun, then going somewhere else, could be evidence of premeditation. Moreover, murdering a fireman, police officer, corrections officer, or other public official is almost always a capital crime.

· Voluntary Manslaughter: This homicide is usually a reckless killing. For example, assume Mike shoots off his gun on the Fourth of July and the bullet strikes and kills a bystander. Mike certainly did not intend to kill that person, but discharging a firearm into the air is about as reckless as you can get.

· Involuntary Manslaughter: Unintentional or accidental killings often involve motor vehicles. If Mike got drunk at the Fourth of July party, drove home, and caused a fatal accident, he would most likely be charged with involuntary manslaughter (actually Intoxicated Manslaughter).

Voluntary intoxication is not normally a defense to any crime. But it is a defense to murder, because murder is a specific intent crime. The defendant must intent both the conduct and the result. Let’s return to Mike, who is having the worst Independence Day ever. Assume Mike got drunk at the party, got in a fight with Tom, and killed Tom. Mike could be convicted of voluntary manslaughter but not second-degree murder. As a matter of law, drunk people cannot form a specific intent.

Self-defense may be a defense as well. In general, the defendant must reasonably fear that his/her life was in danger and react with an appropriate amount of force. Mike would not have a winning self-defense argument if Tom attacked him with a stick and Mike shot him with a gun.

Prosecutors can go several different directions in homicide cases. For a free consultation with an experienced criminal defense attorney in Weatherford, contact Herreth Law. Home and jail visits are available.