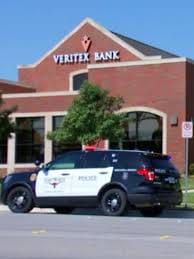 In July 2017, two men stormed into the Veritex Community Bank on Merrick in Fort Worth. Now, one of them just pleaded guilty, and another one awaits a competency hearing.

24-year-old Blake Taylor and his accomplice, 24-year-old Desmond Wells, entered the bank and, according to witnesses, “almost immediately. . .fired shots at bank employees.” They injured three people and fled without taking any money. One witness snapped a picture of the getaway vehicle. That tip led officers to a residence on Blackmore Avenue. After they obtained a search warrant, officers discovered a handgun and clothing that apparently matched the robbery suspects’ tools and attire.

Shortly before his trial began, Mr. Taylor pleaded guilty to several counts in federal court. Mr. Wells, who has pleaded not guilty, awaits a competency hearing.

Tips like the picture in this story often are the breaks that solve cases. But these tips are inherently unreliable. The witness could be biased, mistaken, or just out for money. So, courts scrutinize these tips closely by looking at things like:

· Specificity of the information,

· Elapsed time between the tip and the report, and

· Source of the information.

Prosecutors cannot work backwards. For example, the prosecutors in this case could not argue that the tip must have been reliable because it led to arrests. The tip must stand or fall on its own merits. And, this citizen could have snapped a photo of any vehicle and later claimed it belonged to the alleged robbers.

If prosecutors try to use the photo at trial, there are additional problems. Unless the witness testifies in court, the photo would be almost impossible to authenticate. There are also chain-of-custody issues. Who knows how much sharing and Photoshopping went on between the time the person took the picture and the time police examined it.

If there are evidentiary issues, many attorneys file motions to suppress the evidence. If the prosecutor has less evidence, it’s more difficult to establish guilt beyond a reasonable doubt.

Typically, people are incompetent to stand trial because they are not taking required medication. Once they are re-medicated, they are able to understand the charges against them and participate in their own defense.

Procedural irregularities are often the first line of defense in criminal cases. For a free consultation with an experienced criminal defense attorney in Fort Worth, contact Herreth Law. We routinely handle matters in Tarrant County and nearby jurisdictions.