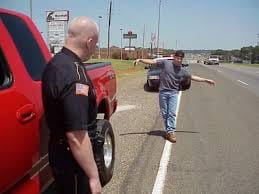 Normally, the walk-and-turn, along with the other approved field sobriety tests, establish probable cause for a DWI arrest. This evidentiary standard is between reasonable suspicion (an evidence-based hunch) and beyond a reasonable doubt. So, it’s a rather low standard.

In refusal cases, the WAT and its ilk must also establish guilt beyond a reasonable doubt. This change puts many Parker County prosecutors in a bad position. They must use the FST evidence in a way it’s not designed to be used. That difference creates an opening for an experienced DWI defense attorney.

Breaking Down the WAT

· Beginning before the officer says “start,”

· Swaying while walking or standing,

· Not walking heel to toe,

· Using arms for balance, and

· Stopping before the officer says “stop.”

Generally, if the defendant shows more than three clues, the officer will testify that the defendant “failed” the test. Each step is a potential intoxication clue, so a lot of things can go wrong.

Perhaps more than the OLS (one-leg stand), which is the other divided attention field test, the WAT is a momentum test. If the defendant steps off the line at any point, it’s difficult to recover, whether the defendant is intoxicated or not. It’s like taking a test in school. If you stumble over two or three questions, it’s hard to get back on track. Officers usually don’t take momentum into account, but a Parker County jury usually does so.

Furthermore, the instructions for this test are usually a little vague. The defendant and officer may not be on the same page as to what constitutes a “heel-to-toe” step. Furthermore, some officers count off for items they don’t warn defendants about. For example, some defendants grab onto their legs, and some officers regard that move as an intoxication clue.

If the officer demonstrates the test, the instructions are much clearer. But officers do not always demonstrate the WAT, especially on roadsides. When they do, they often demonstrate the test incorrectly and then count it against you when you make the same mistake they did!

The field sobriety tests may not accurately measure intoxication or sobriety. For a free consultation with an experienced criminal defense attorney in Weatherford, contact Herreth Law. We routinely handle matters in Parker County and nearby jurisidctions.